Rune is an AI-powered matchmaking and voice chat app designed for the new generation of mobile gamers. Rune was started by two MIT PhD dropouts and was selected for Y Combinator’s Winter 2019 intake, and was funded for $2 million.

I’ve been working closely with Sanjay and Bjarke, the cofounders of Rune, since its inception. As the sole designer on the project, I’ve designed everything that can be designed for Rune - from the core app experience, to illustrations, to video and microcopy.

Recently, I've been heading the growth effort, managing collaborations and partnerships with YouTubers in South America and the US.

Rune helps you find teammates for Brawl Stars, Clash Royale, and more mobile games!
‍
Online users are matched based on their preferred speaking language, games, and skill level.
‍
They immediately start voice chatting with each other.
‍
Rune is different because it caters to mobile-first gamers between the ages of 13-18 in developing countries where Discord and other voice chat apps haven’t captured the market.

Matching to users who are online was cool, but it could sometimes be slow. Our metrics showed that users who had 2+ friends on the platform stuck around longer. If we got the system to provide users with friends, would that increase the number of hours they spent chatting and playing with each other?

Friend Boost added new friends to users' lists who they could chat and play with. Our users are young, eager, and showed us they don't mind reaching out to new friends. The swiping interaction, reminiscent of Tinder, reinforces that users are getting matched.

As usage increased with more friends, it became clear that coordination was an issue - we had users across time zones and countries who really wanted to play together but if they didn't sort out a time beforehand, their next gaming session might not even happen.

Toxicity is a huge problem in gaming - and there's no place for it on Rune. We already actively moderated trolls on voice chat based on feedback, and if we let users just text each other, that would be a huge can of worms we wouldn't be able to close again.

We implemented a messaging feature that would allow users to express themselves just so they could be friendly and positive, and coordinate gaming sessions better.

We used 3 kinds of text messages: Greetings, scheduling, and answers. For fun and color, we also added emojis and GIFs from our users' favorite games. 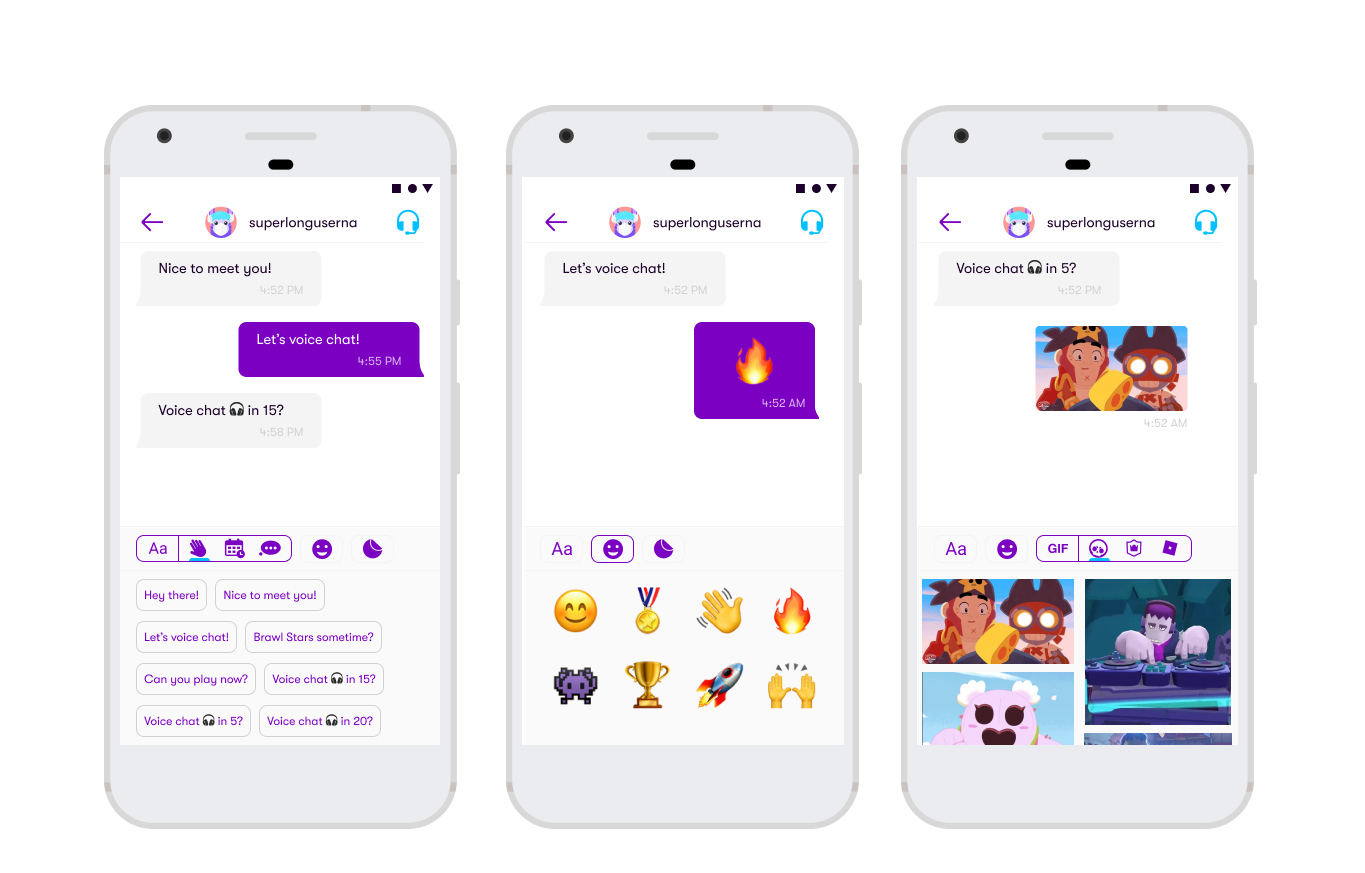 I wasn't kidding when we say our users love to express themselves - one of the top requests we got emails and comments on the Play Store about was custom profile pictures. We love our llama mascot, so instead of allowing custom uploads (which would again present content moderation problems), we set about making a customisable avatar feature.

I illustrated all of the customisations and llamas, and used stackable Figma components to preview and demo the experience. Our llamas are not explicitly gendered and encourage creativity and free expression.

Rune's designers and developers collaborate on Figma. In order to make converting design to code as seamless as possible, we have a comprehensive component library with centralised and nested components, semantic colors, and thorough Auto-Layout.

As Rune continues to add more features, our popular and simple linear flow wasn't going to work. I drew inspiration from the rigid standardisation of Material design UI, combined it with the push+presentation system of screen organisation of iOS, to refresh Rune's look and allow for unhindered growth. 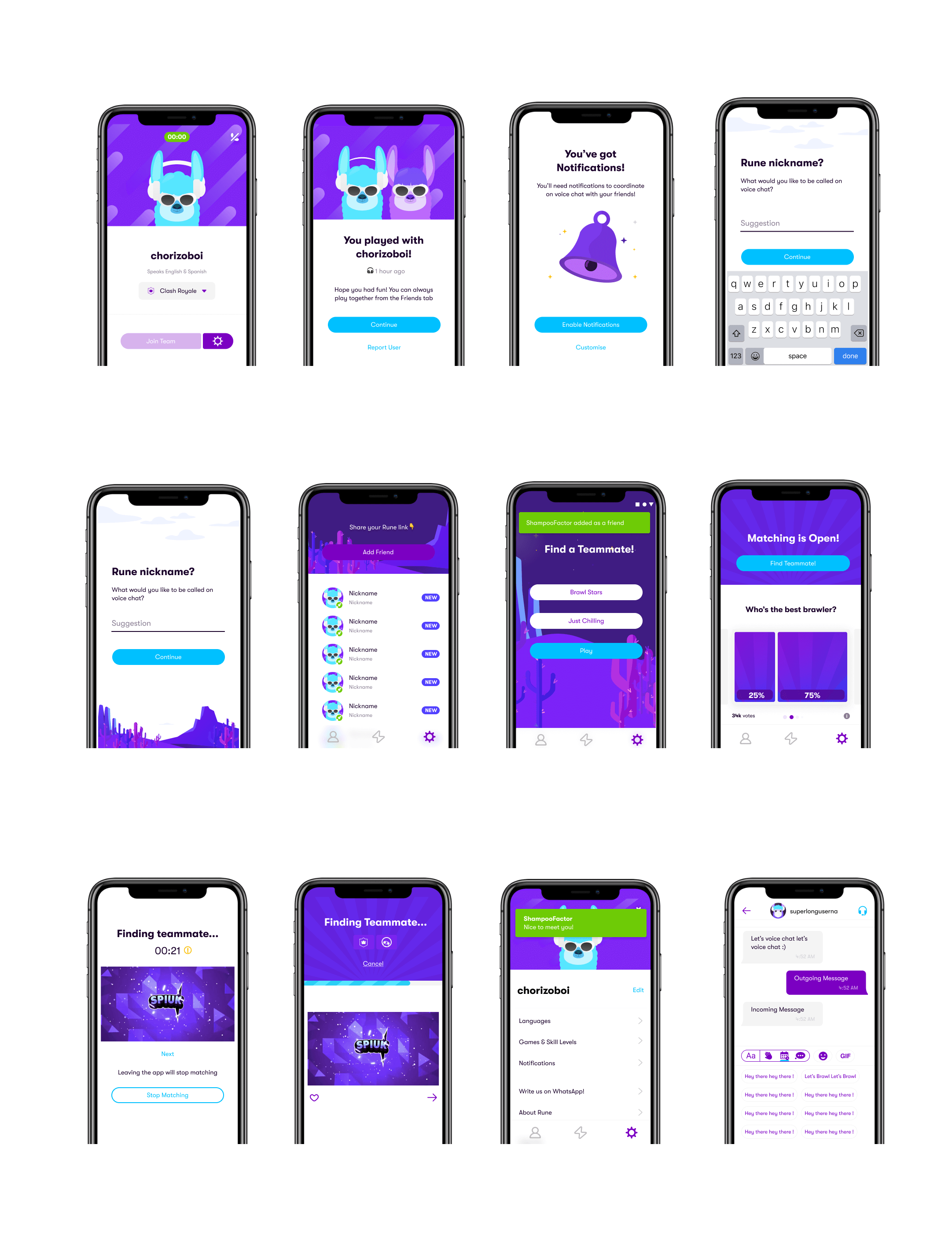 Here's an animation I made for the Google Play Store - hope you enjoyed and if you liked what you saw, I'm actively looking for new opportunities in Copenhagen and elsewhere, so get in touch